This is a new series of charcoal drawings I have been working on using frottage to capture the textures of coal chutes in abandoned mining operations in the Crowsnest Pass in Alberta. Documentation by blkarts.ca.

The charcoal picks up the dents and bumps in the once smooth metal, making the many tons of coal that once flowed through this operation visible. The rubbings reveal the movement of the coal being poured as they tumbled and spilled down the chute. I am drawn to the way that the charcoal conveys motion created by the peaks and valleys of the metal and of my body as I move along the chute. The patterns ripple and cascade down the vellum.

Initially, I was using pieces of charcoal that I created from a willow twigs collected along the Crowsnest River in Blairmore. I used a method from artist Jason Logan's book Make Ink: A Forager's Guide to Natural Inkmaking to make pieces of soft willow charcoal for drawing. Using an old cigarette tin and an Altoid container, I cut the willow to size and placed them inside.

Later that evening, the tins were placed in the centre of a fire where they sat in the blaze for over an hour. After the fire was done and the tins were cooled, they were opened, revealing black pieces of willow charcoal.

While walking the hiking trails in Blairmore, Hillcrest, Frank, and Coleman, I have come across many camping sites. I began collecting pieces of charcoal from fire pits. I have since been using the charcoal from these sites to continue this series of drawings. 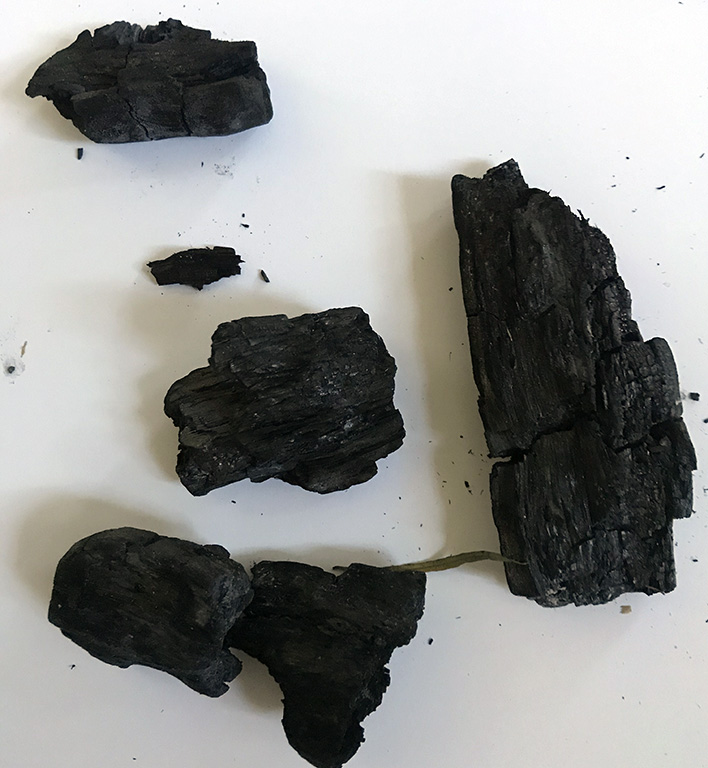 The drawings will be presented in an exhibition at the University of Lethbridge Art Gallery in 2021.

These drawings emerge from research and reflection on the past, present, and future of coal mining in the Crowsnest Pass, Alberta. On my first visit to the area, I was immediately drawn to a Greenhill Mining Complex, an abandoned mining operation once operated by West Canadian Collieries (WCC) on Bluff Mountain just north of Blairmore. At the time, I was unaware of the proposed Grassy Mountain Coal Project, an open-pit metallurgical coal mine, to be operated by Australian-owned Riversdale Resources, through its wholly owned subsidiary Benga Mining.

I have since learned that the abandoned coal mine that I was initially drawn to (and have since created drawings from) is located in the far south end of the proposed Grassy Mountain Coal Project. I also learned that WCC was the company that operated the strip mine on Grassy Mountain until the 1960s, creating the existing mine footprint in the map of the proposed mine operation, which can be found here.

In 'bringing life' to a mine, what life is taken away? How do we measure the so-called lifespan' of a mine? What role do remediation and reclamation play? Grassy Mountain is part of a legacy of lands left un-reclaimed by coal mining companies in the Crowsnest Pass. Looking at the mountain today, one can see the wounds of the past strip mine where open cuts expose seams of coal close to its surface.

View of the east face of Grassy Mountain. Photo: blikarts.ca.

If approved, construction on the open-pit coal mine on Grassy Mountain could begin next year (2021) and would have a 'life span' of 23-25 years. Even before the Alberta government revoked the 1976 Coal Policy, the area of the proposed Grassy Mountain Coal Project fell under Category 4, which did not offer as many protections as Categories 1-3. At present, the environmental impact assessment has been been deemed complete and a virtual public hearing will be held October 27, 2020. In addition to Grassy Mountain, Riversdale Resources has acquired three coal leases in the Crowsnest Pass (see their website for a map of the Crowsnest Pass Complex) and so have other mining companies like Atrum, Cabin Ridge, and Montem, covering other steelmaking coal reserves.

The Coal Policy had established four categories of protection for lands in Alberta against coal mining. In June 2020, the Coal Policy protecting ecologically sensitive regions from coal mining exploration and development was revoked. Category 1 public lands remain protected under a 'protective notion' and cannot be mined. However, no protections have been put in place for lands that fell under Categories 2 and 3. Previously, open-pit mining was restricted on lands in these categories. What this means for lands that previously fell under these categories is unclear. The proposed Atrum mine is on lands that was under Category 2 protections. As CPAWS notes in their call for new coal oversight, category 2 lands overlap with most of Alberta’s headwaters. With the Coal Policy gone, the future of the eastern slopes of the rocky mountains and foothills looks bleak.

The headwaters for the Oldman River, a vital part of the Oldman Watershed are located in the proposed mining area. Two creeks, Blairmore and Gold Creek, both vital to the Oldman Watershed are located within the footprint of the Grassy Mountain Coal Project. Water contamination from the proposed mining operation is a major concern as is the amount of water required for these operations. I previously wrote about the devastating effects of selenium poisoning caused by the open-pit coal mines in nearby Elk Valley, BC, now considered a contamination crisis without no clear solution in sight. Nitrate and sediment run-off also pose threats to land, water, and life.

Richard Quinlan, a retired Fish and Wildlife Habitat Protection Biologist with experience working in the coal industry, states that any environmental monitoring and protections put in place by coal mining companies will not be adequate, "surface mining and protection of headwater streams are incompatible in mountain landscapes, such as in the Crowsnest Pass. One excludes the other. The resulting failures have detrimental impacts on water quality, aquatic life and fish" (Quinlan). A terrifying prospect, considering the wildlife (including at-risk species), and all those, including human populations, that rely on this watershed for survival. In addition, the removal of forest, small creeks, vegetation, and other habitat will be required to bring these types of mining operations to life. While mining companies develop plans to monitor, manage, and eventually conduct so-called remediation and reclamation, it seems more than evident that the environmental damage of open-pit coal mines poses too great of a risk to take.

Canadian Parks and Wilderness Society Souther Alberta Chapter (CPAWS) has a campaign to take action, calling on Alberta Premier Jason Kenney to stop new coal mines, leases, and exploration permits until a new policy or protections are put in place.

Click here to add your signature. The CPAWS letter can also be used as a template to contact Alberta's Minister of Energy and Minister of Environment and Parks, and your MLA.

Greenhill Mining Complex: "It's Yours" | Part 1