Vegetation grows throughout the Greenhill Mine Complex: trees, wildflowers, lichens, and vibrant green mosses growing despite what has been taken from the land and the lack of repair or care for this site. An old medical facility still stands, fenced off with barbed wire. Though there is nothing of an acknowledgment at the site, twenty-five men lost their lives working underground at this mining operation. Along the fence and surrounding area, patches of green stand out against the black ground covered with coal dust, small chunks and pebble-sized pieces of coal. The plants that seem to be thriving are common mullein, a plant that often grows in disturbed areas.

The Greenhill Mine Complex offers disturbed areas for common mullein to thrive. I wonder what the plants are taking into their bodies. Are they phytoremediators, playing a part in healing the land?

Since 2016, I have collaborated with Latifa Pelletier-Ahmed, a botanist, herbalist, and educator and co-owner of ALCLA Native Plants. Together, we have facilitated plant walks in urban areas of Mohkinstsis (Calgary), Alberta, where we invite the public to walk with us as we identify and get to know plants, including plants commonly known as weeds. Common mullein was one such weed that we frequently encountered. Common mullein has long been regarded for its medicinal properties and various utilitarian uses, containing chemical compounds such as saponins, flavonoids, vitamin C and minerals. On one of our walks, we collected the flowers and leaves of the plant to make tea, being careful to gather from a safe spot and strain the fine hairs from the leaves before consuming. 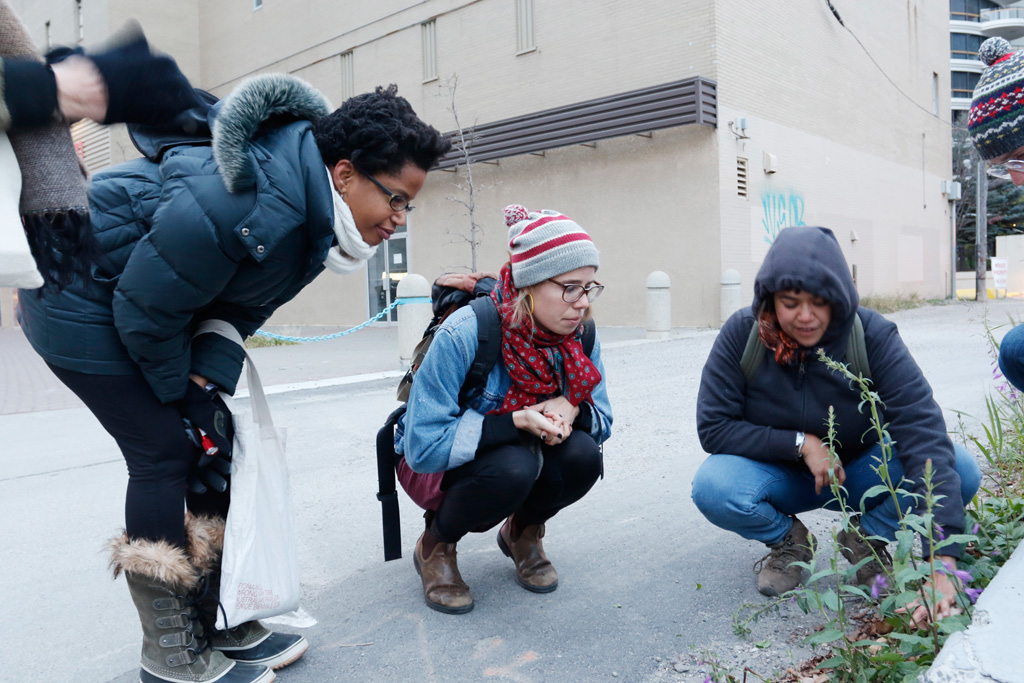 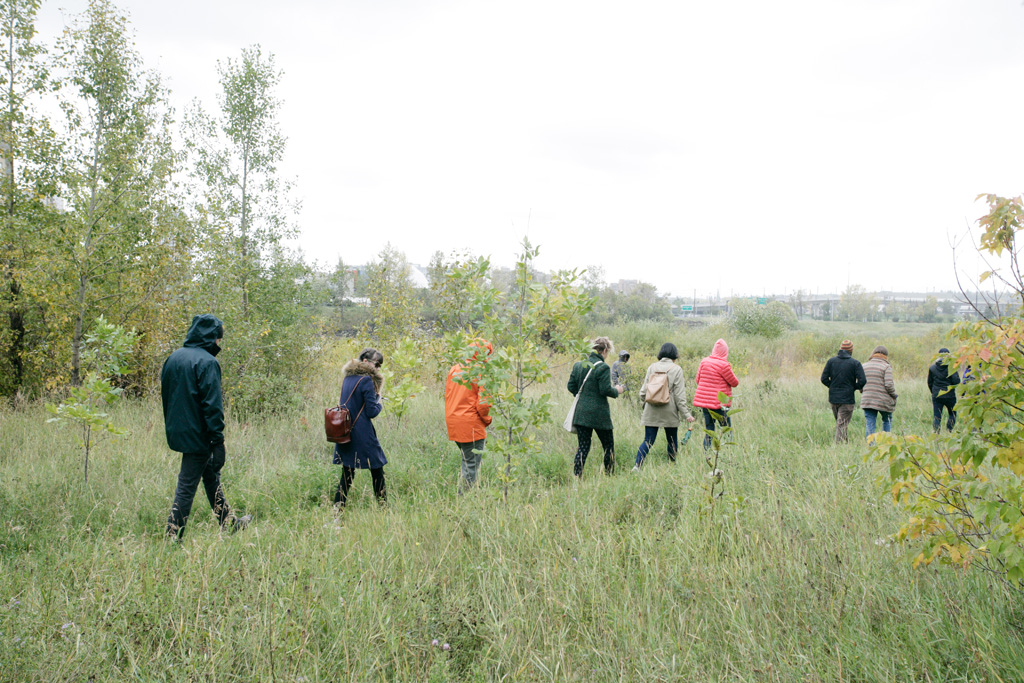 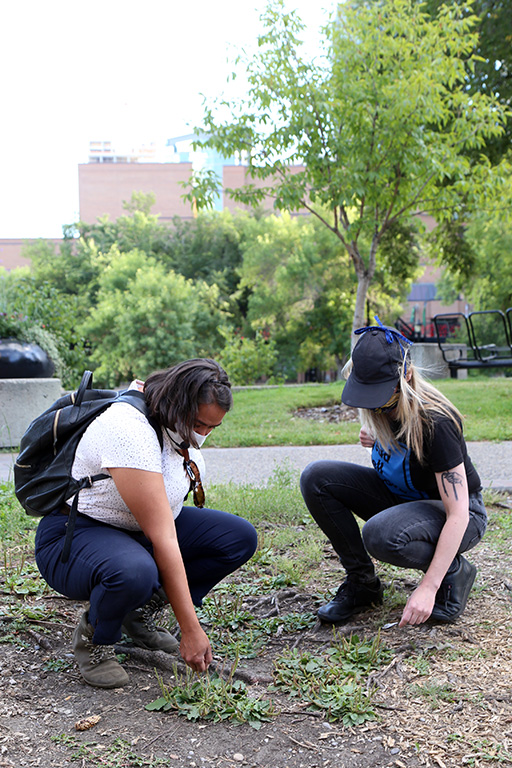 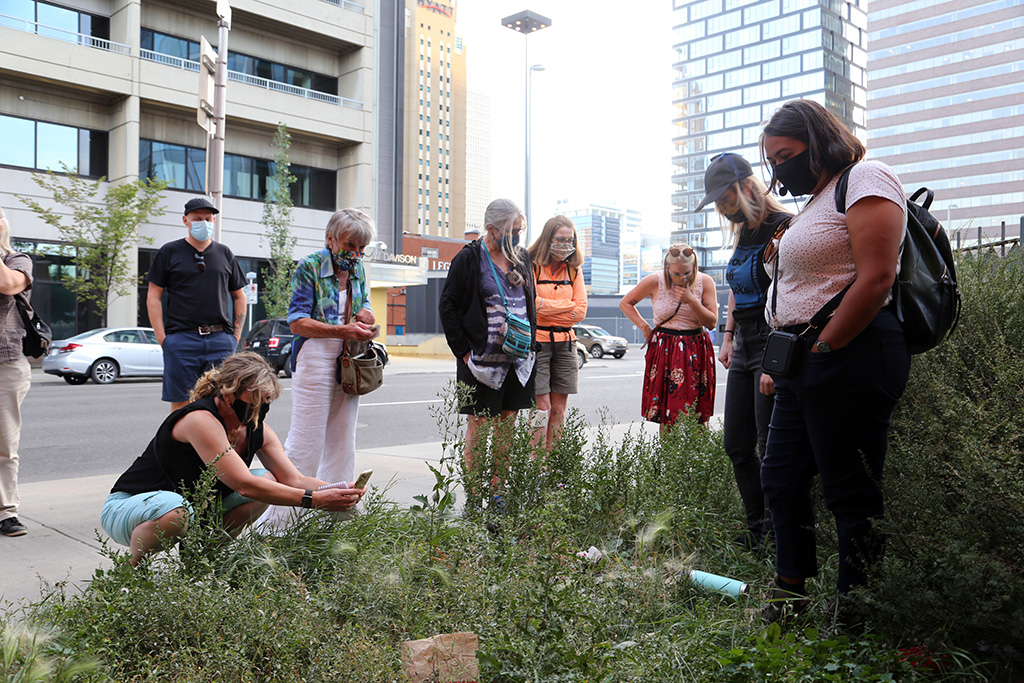 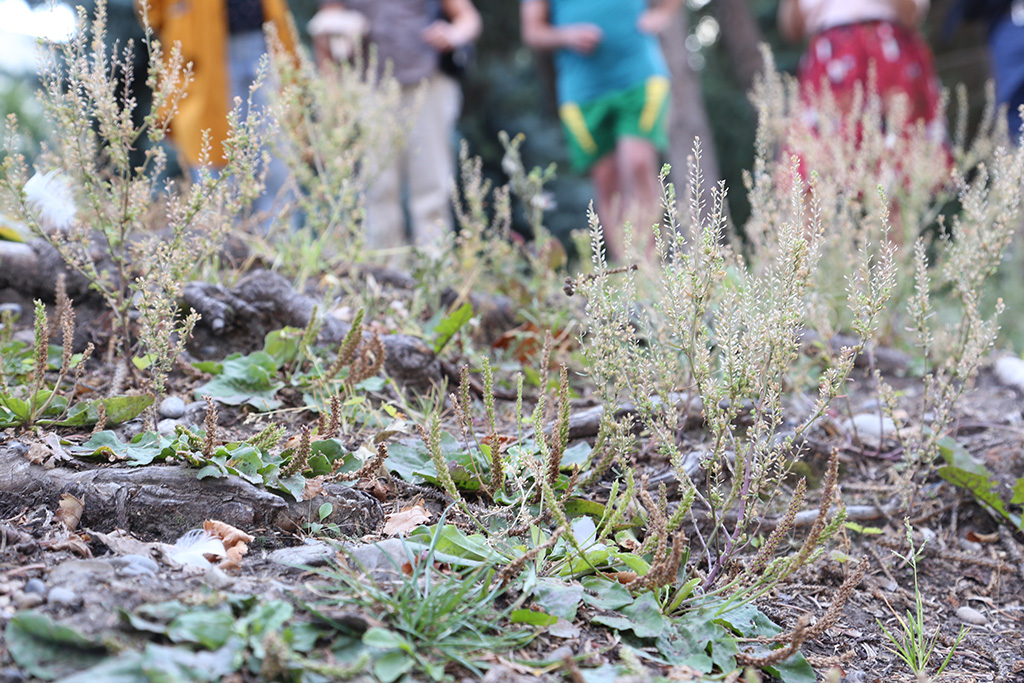 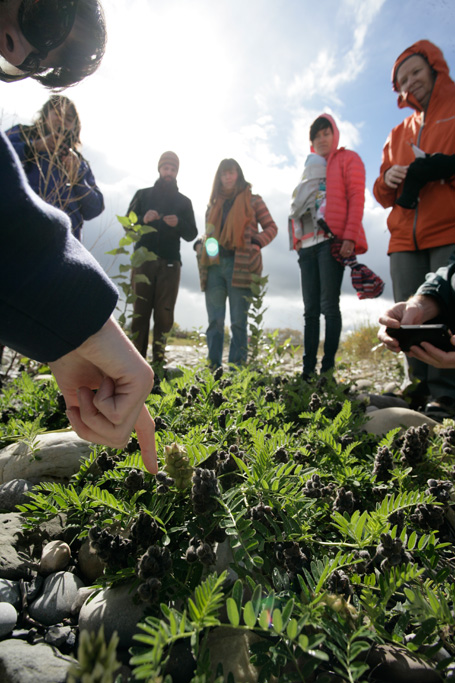 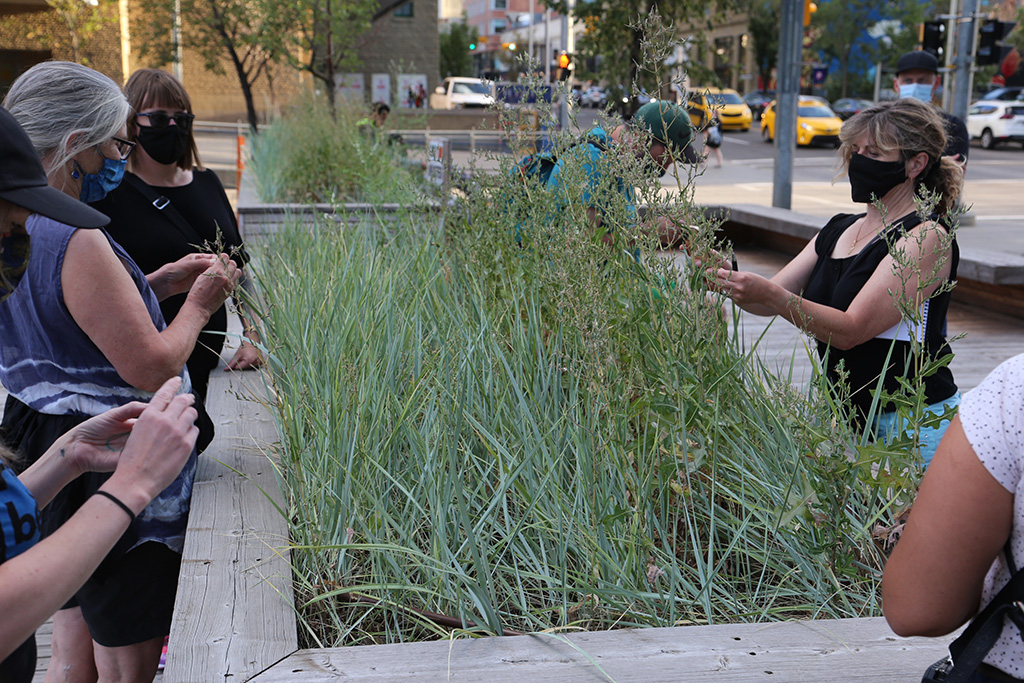 What is a weed but a plant out of place with its own fascinating history? Mullein, like many weeds and "naturalized" plants, is connected to the history of white settler colonialism on Turtle Island, what is now known as Canada. It is called a colonizing or pioneer plant as it quickly spreads to new areas and can displace native plant species. Brought by European settlers over 250 years ago, mullein is native to parts of Europe and Asia. The introduced plant was valued for its medicinal abilities and its use as a fish poison. Today, it is considered a noxious weed in Alberta and you can see it featured on the cover of the Alberta Invasive Species Plant Guide.

Mullein is known throughout history and worldwide for the treatment of various health issues in humans and animals including breathing aliments. It can be found in ingredient lists for various herbal remedies including ear drops and lung support supplements. It has also been studied for its potential use in phytoremediation.

Research conducted in Serbia explored the potential of five plants, including mullein, to clean up heavy metals from soil. Mullein was identified as a hyperaccumulator for cadmium. Hyperaccumulators are plants that have the ability to take large amounts of one or more heavy metals into their bodies from the soil. Cadmium (Cd) is a toxic metal that can be dangerous to humans, plants, micro-organisms and animals. Although some Cd is naturally occurring in the environment in soils and rocks, due to human activities such as mining, refining, burning fossil fuels (like coal), throwing out of household waste, and pollution, Cd contamination is now a major concern for soil and water health, as well as food safety.

Phytoremediation, using plants to repair polluted and contaminated soils, is often employed in remediation efforts, as well as various bioremediation techniques. Revival Field (1991-ongoing) by artist Mel Chin, in collaboration with Dr. Rufus Chaney, senior research agronomist, USDA, is an example of an artwork that employed phytoremediation and allowed scientific research to be developed through the creation of an artwork. In this work, plants are used to extract heavy metals from contaminated soil. This long-term artwork is an ever-evolving process of remediation that examines the site's ecology while expanding concept of the role artists and art can play in our society.

Torches and Candlewicks: the Many Uses of Mullein

Mullein has been known by many names, including Torchwort, Candlewick, and Hag’s Taper. These names refer to the plant’s use as a light source and tool. The end of the plant’s stalks were once used as torches purported to have provided light to mining prospectors and witches working in the dark. Parts of the plant have also been used for candle and/or lamp wicks. Perhaps Martine de Bertereau used mullein to light her way, whether she was working above or below ground.

Like canaries, lamps were a literal lifeline for miners. Although I did not find the lamphouse at the Greenhill Mine Complex, there was at one time a lamphouse where miners would collect their lamp at the beginning of their shift. As I learned at the Bellevue Underground Mine Museum, each miner would be issued a numbered check in exchange for their lamp. If the lamp check wasn’t returned at the end of the workday, the timekeeper would know that the miner was missing, and a group could be sent to find them. 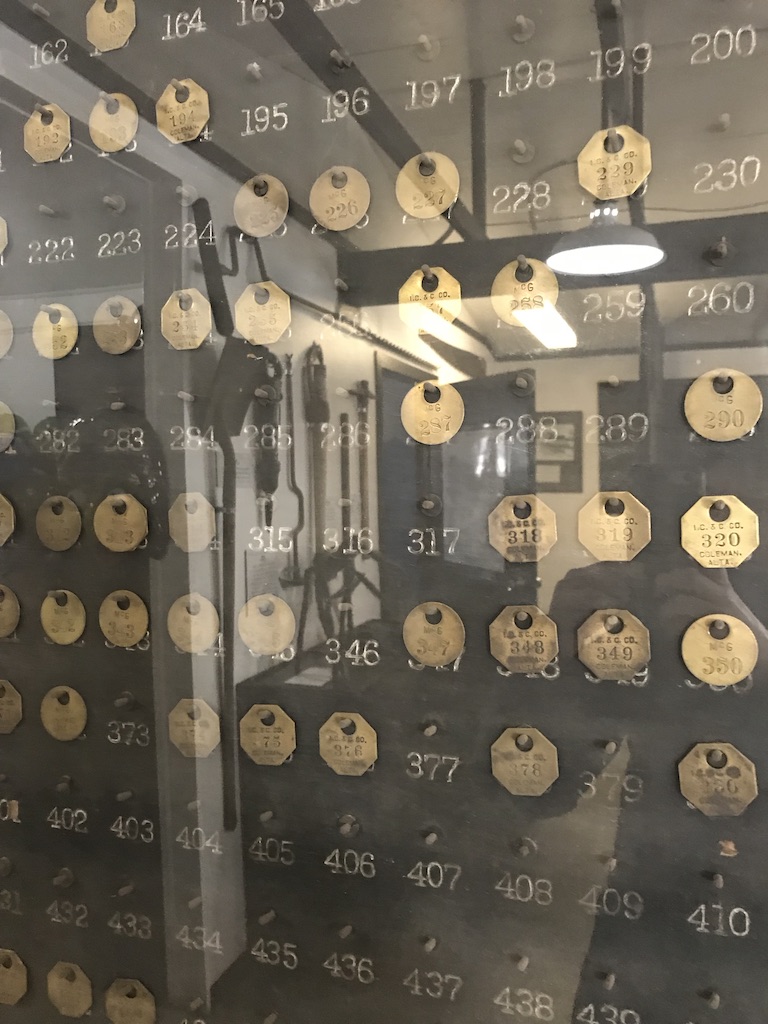 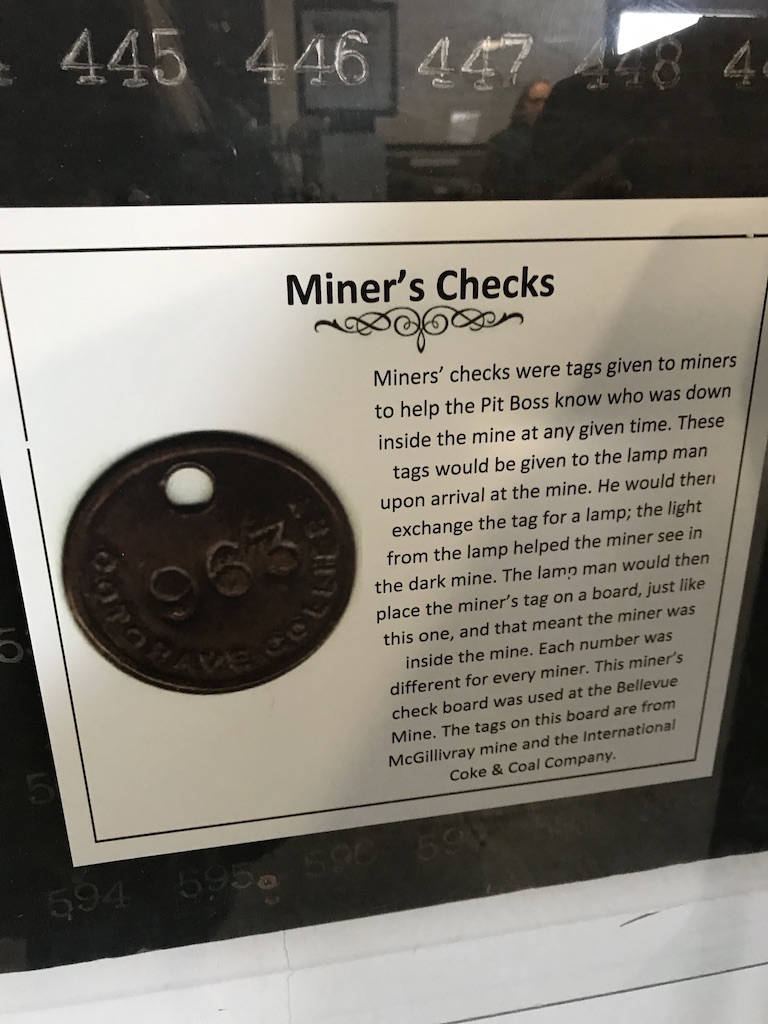 {"items":["ce5c81_a9f4882640484e24b0e5255cbf5404b7~mv2.jpeg","ce5c81_386df61e47db4dd3ac78f23f242a2a5f~mv2.jpeg"],"styles":{"galleryType":"Columns","groupSize":1,"showArrows":false,"cubeImages":true,"cubeType":"fill","cubeRatio":1,"isVertical":true,"gallerySize":300,"collageAmount":0,"collageDensity":0,"groupTypes":"1","oneRow":false,"imageMargin":10,"galleryMargin":0,"floatingImages":0,"chooseBestGroup":true,"smartCrop":false,"hasThumbnails":false,"enableScroll":true,"isGrid":true,"isSlider":false,"isColumns":false,"isSlideshow":false,"cropOnlyFill":false,"fixedColumns":2,"enableInfiniteScroll":true,"isRTL":false,"minItemSize":50,"rotatingGroupTypes":"","rotatingCubeRatio":"","gallerySliderImageRatio":1.7777777777777777,"numberOfImagesPerRow":2,"numberOfImagesPerCol":1,"groupsPerStrip":0,"borderRadius":0,"boxShadow":0,"gridStyle":1,"mobilePanorama":false,"placeGroupsLtr":false,"viewMode":"preview","thumbnailSpacings":0,"galleryThumbnailsAlignment":"none","isMasonry":false,"isAutoSlideshow":false,"slideshowLoop":false,"autoSlideshowInterval":4,"useCustomButton":false,"bottomInfoHeight":0,"titlePlacement":"SHOW_ON_HOVER","galleryHorizontalAlign":"center","galleryTextAlign":"center","galleryVerticalAlign":"center","scrollSnap":false,"itemClick":"link","fullscreen":false,"allowSocial":false,"allowDownload":false,"allowTitle":true,"allowDescription":false,"loveButton":false,"loveCounter":false,"videoPlay":"onClick","scrollAnimation":"NO_EFFECT","scrollDirection":0,"overlayAnimation":"NO_EFFECT","arrowsPosition":0,"arrowsSize":23,"watermarkOpacity":40,"watermarkSize":40,"useWatermark":true,"watermarkDock":{"top":"auto","left":"auto","right":0,"bottom":0,"transform":"translate3d(0,0,0)"},"loadMoreAmount":"all","defaultShowInfoExpand":1,"allowTitleExpand":true,"allowDescriptionExpand":true,"allowLinkExpand":true,"expandInfoPosition":0,"allowFullscreenExpand":true,"fullscreenLoop":false,"galleryAlignExpand":"left","addToCartBorderWidth":1,"addToCartButtonText":"","slideshowInfoSize":200,"playButtonForAutoSlideShow":false,"allowSlideshowCounter":false,"hoveringBehaviour":"APPEARS","thumbnailSize":120,"magicLayoutSeed":1,"imageHoverAnimation":"NO_EFFECT","calculateTextBoxHeightMode":"AUTOMATIC","calculateTextBoxWidthMode":"PERCENT","textBoxHeight":0,"textBoxWidth":200,"textBoxWidthPercent":50,"textImageSpace":10,"textBoxBorderRadius":0,"textBoxBorderWidth":0,"textsVerticalPadding":0,"textsHorizontalPadding":0,"titleDescriptionSpace":6,"customButtonText":"","customButtonBorderWidth":1,"customButtonBorderRadius":0,"loadMoreButtonText":"","loadMoreButtonBorderWidth":1,"loadMoreButtonBorderRadius":0,"imageInfoType":"NO_BACKGROUND","itemBorderWidth":0,"itemBorderRadius":0,"itemEnableShadow":false,"itemShadowBlur":20,"itemShadowDirection":135,"itemShadowSize":10,"imageLoadingMode":"BLUR","expandAnimation":"NO_EFFECT","imageQuality":90,"usmToggle":false,"usm_a":0,"usm_r":0,"usm_t":0,"videoSound":false,"videoSpeed":"1","videoLoop":true,"galleryLayout":2,"gallerySizeType":"px","gallerySizePx":300,"allowHover":true,"mobileSwipeAnimation":"NO_EFFECT","gotStyleParams":true,"showVideoPlayButton":true,"imageResize":false,"galleryImageRatio":2,"modifiedGallerySize":true,"selectedLayout":"2|none|1|fill|true|0|true","layoutsVersion":2,"selectedLayoutV2":2,"isSlideshowFont":false,"externalInfoHeight":0,"externalInfoWidth":0},"container":{"galleryWidth":2580,"galleryHeight":1440,"scrollBase":0,"height":null,"width":null}}
Tour of the Bellevue Underground Mine at the Bellevue Underground Mine Museum. Photo: Alana Bartol.
Moments before total darkness in the mine on the Bellevue Mine tour.

I clearly remember the moment on the Bellevue Underground Mine tour when the tour guide turned off the lamp in the mine tunnel, the only source of light suddenly gone. Standing in complete darkness is an incredibly bizarre experience. The absence of light took on an enormous presence that is hard to explain. I simultaneously could and couldn’t locate myself within it. It felt all consuming. And while it was a grounding and disorienting experience, I could envision how one could use their wayfinding skills and other senses to find their way through it.

Today, the mines are moving from underground to the surface moving workers out of tunnels to the tops of mountains that soon become pits. As I reflect on everything I am learning and experiencing, I continue to think about our ability (or lack thereof) to attune ourselves to the reverberations of our environments, to de-centre ourselves, and to consider new ways of being in and with the more-than-human world.

What is lost when a mine is brought to life?

Greenhill Mining Complex: "It's Yours" | Part 1